As one of his final legacies, Robert Brearley Oddie, Sibford’s second head, fully endorsed the setting up of an old scholars association. Most of the other Friends schools had such a body but Sibford had lagged behind. The ‘Sibford Old Scholars’ Association’, commonly known as ‘SOSA’, was inaugurated on the 19th June 1903. Its first President was Joseph Spence Hodgson, and its first General Secretary was Edward P Kaye. 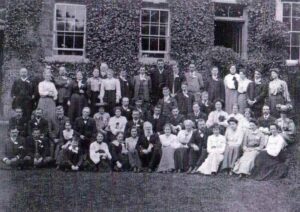 The first annual Reunion was held at Whitsuntide between May 21st and Tuesday 24th 1904 and its first Annual General Meeting was held over that same reunion.

The first annual magazine of the Association was published and was called simply ‘Sibford Old Scholars’ Association – Annual Report’. This title was changed in 1935 when the Annual Report was removed from front cover. A further change to the title occurred in 1940 when the title became ‘The Sibford Magazine’. Further changes happened in 1950 when the magazine was simply called ‘Sibford’ and this remained until 1971 with the emergence of a joint publication between the School and SOSA.

The Old Elm at the crossroads on entering Sibford Ferris was adopted as the symbol for SOSA. A plot of land was bought in 1934 and a garden of remembrance was built on the opposite side of the road. Despite the loss of the old Elm to old age and the ravishes of Dutch Elm disease, an Elm tree still remains in the garden.

The SOSA motto was adopted from the Domeday book “Ye menne of sheep-ford wendath withersover they wilen” which in modern English reads “ You men of Sibford go where the will takes you.”

This is one of three years in which the reunion didn’t take place this year was due to the First World War. The others being in 1921 due to economic disruption throughout the country and in 2020 a virus called coronavirus (Covid19) shut down events worldwide including our very own reunion.

The Annual Reunion was held over Easter for the first time but reverted back to Whitsun in the following year.

A Constitution with Rules was established for the first time.

The SOSA badge was designed by Howard Quinton and incorporated into the Association – its inscription “Quo Volumus Vagamur “ is in Latin and is a play on the SOSA motto ‘Go where the will takes you.’

Despite the Second World War, the Reunions continued as did the SOSA Magazine. Howard Quinton was President for an unprecedented four consecutive terms 1939 – 1943.

SOSA celebrated its fiftieth anniversary and had joint Presidents for the first time they were Alice Long and Edward P.Kaye.

The last Whitsuntide Reunion took place. It moved to the August Bank Holiday for many years except for an Easter Reunion in 1971 and a Spring Bank Holiday reunion in 1997 & 1998.

The first publication of a joint magazine between SOSA and the School was introduced – probably the first community venture of its kind in the country. This ran until 2000 when the School started its own magazine ‘The Sibfordian’ and SOSA went back to its own publication but called it ‘The Sibford Rocket’.

Presidential Dinners were introduced to Reunions and this continues in one form or another until the present day.

SOSA celebrated its 100th birthday. An oak tree is planted at the Hill by Stephen Bunney on the School’s Open Day to commemorate the event. Guy Kingham was SOSA’s President and leads the celebrations at a black-tie Ball at the Reunion.

The Association is able to donate £40,000 towards the refurbishment of the main School hall.

Sibford School has a even longer history which you can read on their site here.

Get involved with the committee